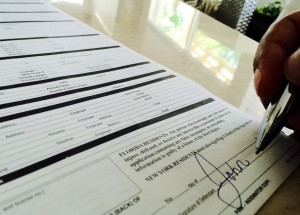 What are Your Responsibilities When Signing for a Bail Bond?

The signer for the bail bond contract is known as the “Indemnitor.” The indemnitor/signer can be a family member, friend, clergy, employer, teacher, doctor, attorney, etc., and the one who qualifies for the bail bond on behalf of the defendant. Once they sign the bail bond and become the “indemnitor,” they become legally and financially responsible for ensuring that the defendant shows up each time for all of their court obligations.

If the defendant does not show up for court, it is the “indemnitor” who will be held financially responsible for paying the full amount of bail to the court. A bail bond costs only 10% of the total bail amount as the bondsman’s fee to get someone out of jail. However, when that person does not fulfill their legal obligations, the courts will still require the full amount of bail to be paid, and it is the “indemnitor” who will be required to pay it. The amount can be significant, and it is highly advisable to only bail out those whom you know well and trust completely.

What Happens After They Go To Court?

Exoneration of Bond: Once the defendant has shown up for court on the appointed day(s), the bail bond will become “exonerated” and there will be no further legal or financial responsibility on the part of the “indemnitor,” or the bail agency. The bail bond will be exonerated no matter the outcome of the court case; so whether or not the defendant remains in police custody after the court proceedings is of no financial consequence to the “indemnitor.”

Does The Premium Get Returned To Me?

Do I Have to Keep Making Payments on the Bond?

If there was a payment arrangement made at the time the bail bond contract was signed, and there are monthly or weekly payments being made on the premium, these payments would need continue until the full amount of the premium has been paid in full to the bail bondsman. This is true even if the case was completed, dismissed, rejected by the D.A., etc.

If you have additional questions or concerns about an indemnitor or a signer’s responsibilities, we would be happy to provide you with any and all the information you require. Our offices are open 24/7 and a bail bondsman is available immediately at 661-299-2663.