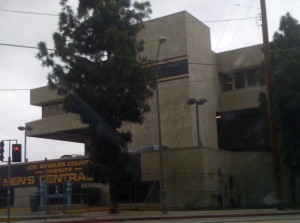 Do you know someone who’s been arrested and taken into custody and transported to Men’s Central Jail? If so, and you’d like to get them out as fast as possible, we can help.

All visitors must register online or in person at the jail. As with all the other jails, visits are limited to 30-minutes in length, twice a week. All visitors are subject to search while on the premises and subject to arrest if prohibited items are discovered. For a full list of Men’s Central Jail see: visiting rules and regulations.

When an inmate arrives at Men’s Central Jail, they will need to be booked into the system before they can be bailed out. Booking includes having their photograph taken, fingerprints recorded and having a national background check conducted. Once this process is complete, bail will be set (if it hasn’t been already at a previous location) and it will be possible to obtain release via bail bond.

As mentioned above, Men’s Central Jail is the biggest in the world and it is incredibly busy. Because of this, the booking process can take anywhere from 12 to 24-hours to complete, during which time the inmate will be unable to be bailed out. When an inmate is bailed out, they will need to go through another round of processing, this time to be processed out of the system. Again, it can take anywhere from 4 to 24-hours for this to occur, and we have no control over this.

With the amount of time it takes to get inmates processed in and out of the jail, it’s often best to get the bail bond process started as soon as possible after their arrest.

The bail bond process isn’t very complicated and it can easily be completed in a short amount of time. It starts by calling us and providing the name, birth date and date and time of arrest of the inmate you want to bail out. We will use this info to locate them within the jail system and verify their eligibility for bail. Once complete, we have you fill out the short, simple bail bond application forms and sign the indemnitor’s agreement. Finally, we send someone to the jail to post the bond and your friend or loved one will be released as soon as they can be processed out.

The indemnitor is the person who signs the bail bond. When someone signs a bail bond, they agree to become legally and financially responsible for making sure that the defendant shows up for court. If they do show up for all their court appearances, then the bail bond will be exonerated and there will be no further responsibility on the part of the indemnitor.

If the defendant does not show up, then the indemnitor will be responsible for paying the full amount of bail to the courts.

What Does a Bail Bond Cost?

If a defendant does not show up for all of their court appearances, the indemnitor will be legally responsible for paying the full $10,000 to the court. Therefore, it is best to only bail out those whom you know and trust.

Paying for a Bail Bond

If you’d like to finance your bail bond, let us know. We have several flexible payment plans available that are designed to fit most any budget.

For more information regarding Men’s Central Jail bail bonds, or if you’d like to get the bail bond application process started right away, please give us a call any time of day or night at 661-299-2663