Where Are You Transported To If Arrested At Six Flags, Hurricane Harbor? 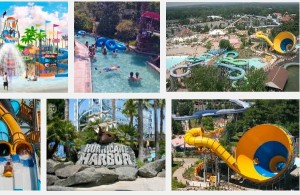 If a friend or loved one has been arrested and taken into custody at Six Flags Hurricane Harbor in Santa Clarita, you’ve probably got a lot of questions regarding where they are and how to get them out of jail. We know how stressful times like this can be, and a friendly, knowledgeable and most importantly, local bail bondsman on our staff is available 24/7 to answer your questions and help you out.

Like Magic Mountain, Six Flags Hurricane Harbor has its own security force. Their park security states that all guests are required to pass through metal detectors before entering the park, and will have their bags inspected. Any inappropriate items should be left at home or in their cars. However, some who do not heed to this warning may be stopped and/or arrested at the security entrance.

The on-site jail is small, with room for only about 40 inmates at a time. If the jail becomes overcrowded, or if an inmate is not bailed out within 72-hours, they will begin transferring inmates to the larger County jails in downtown Los Angeles. Male inmates are sent to Twin Towers and females are sent to the CRDF, Lynwood Jail.

These facilities are some of the largest jails in the world, and when an inmate arrives there, it will take anywhere from 12 to 24-hours to go through another round of processing at their new location. As the inmate awaits their turn to be processed in, they will be unable to be bailed out until they are deemed clear for bail.

You’re probably familiar with the arrest and booking process from having seen it on television or in movies. It’s the procedure that every inmate goes through and involves having their picture taken, fingerprints recorded and a national background check is conducted. Once complete, bail will be set and it will be possible to obtain their release via bail bond.

Booking and processing can take anywhere from 45-minutes to several hours, depending on how busy the sheriff station is. While an inmate cannot be bailed out until the process is complete, it is possible to begin the process in order to get them out as fast as possible.

The bail bond process isn’t very complicated, and it all begins by giving us a phone call. We will need some general information about the inmate in order to locate them within the system and verify their eligibility for bail. Once we do that, we have you fill out the short, simple bail bond application forms and sign the indemnitor’s agreement. Finally, we send someone to the jail to post the bond and your friend or loved one will be released shortly thereafter.

If you’re out of the area, or simply feel more comfortable at your own home or office, we can handle the entire bail bond application process via phone, fax or email. We’re local, but you don’t have to be.

The Cost of a Bail Bond

Most of our clients prefer to pay via major credit/debit card, of which we accept Visa, Master Card, American Express and Discover. However, we also accept cash, business and personal checks, money orders, bank account transfers and money wire.

For those who are interested in financing the cost of a bail bond, we provide a variety of flexible payment plans designed to fit most any budget. Also, no matter how you choose to pay, we never include any additional fees, charges or interest.

If you would like to get the bail bond process started right away for someone arrested at or near Hurricane Harbor, or if you simply need some answers, please give us a call any time of day or night at 661-299-BOND (2663). Our consultations are always free.